Thornbridge beers were first brewed in early 2005 after a 10 barrel brewery was established in the grounds of Thornbridge Hall, Derbyshire.

From the beginning, Thornbridge's vision was to create beers that would make them one of the UK's leading new breweries and the adoption of the 'Innovation, Passion and Knowledge' strap line being a statement of the brewery’s culture. 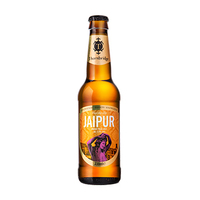 The immediate impression of this wonderful multi award-winning India Pale Ale is soft and smooth...