Driven by the desire to return home, Armelle and Dominique, who is a native of Pietraserena, a small village of 76 inhabitants located in the canton of Bustanico, began thinking about developing a promising project in Corsica.

During the summer of 1992, while attending a concert of “I Muvrini” (a famous Corsican group) in Corte, they felt like drinking a Corsican beer.  But it hadn’t been invented yet.

“Claiming not only to make beer in Corsica, but to make a Corsican beer!”: the idea was preposterous. And yet… beer, called “liquid bread” by the Elders is part of the history of civilizations and people from the South.

Result of a delicate alchemy between grains and pure water, this was the first transformation man found to conserve his grain and, by using yeast, purify his water. It is estimated that beer was first created in 6000 B.C.

Liquid bread was therefore a basic daily staple and as such, an essential product for the city’s survival. Beer was present in Assyria (Syria, Lebanon and Israel), the Egyptians had their “Beer House”. 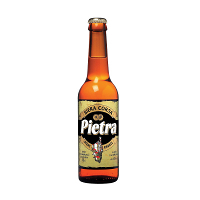