February 24th, 1634 is a special date for the Paulaner brewery. On this date, the Munich commercial brewers filed a complaint with the mayor in order to ban the Paulaner monks of the Neudeck monastery in the Au district from selling their home-brewed beer. They were unsuccessful. This first official reference is to this day still considered the founding date of the Paulaner brewery and has been a vital part of Munich’s culture, tradition and history ever since.

Paulaner remains connected to its origins. The Oktoberfest in Munich and the annual Salvator tasting with the “Politiker Derblecken“ (roasting) of the local politicians are just two examples of how Paulaner keeps its ties to Munich traditions. 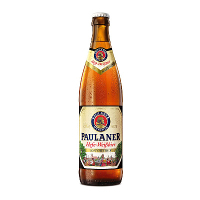 The Paulaner Hefe-Weißbier Naturtrüb is the bestseller No. 1 of the Paulaner...