The Krombacher Brewery is documented for the first time in 1803. It started life as a family brewery, well positioned on the through road. The brewery grew and began specialising in craft brewing.  The beginnings of branding can be traced back to 1908, when, for the first time, a so-called “manufacturer’s mark” appeared in a small advertising brochure. The emblem chosen was the Kindelsbergturm, or tower. The reference that the Brewery lies at the foot of the Kindelsberg lent itself to naturally suggest the landmark as the brewery’s emblem. Even though the `Krombacher` island has now become the mythological icon of Krombacher brand advertising. The Kindelsbergturm however, is still to be found on each bottle in the brewery’s coat-of-arms to the present day. 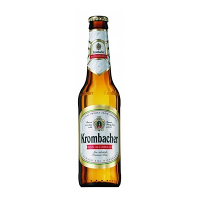