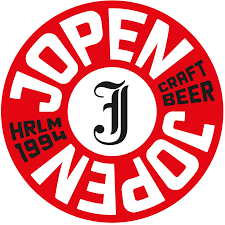 In 1994 the Dutch town of Haarlem celebrated its 750th anniversary. To honor this once glorious brewing city, a team of brewers reintroduced two forgotten Haarlem beers.  The responses ranged from 'Ooh nice' to 'Can't you brew such fantastic beer for us more than once every 750 years?

And so the Jopen brewery, named after the large beer barrels of the past, was born.  Since then, Jopen have been enthusiastically brewing craft beer that is different from normal.

Due to the use of a special yeast, hardly any sugars are converted into alcohol during the...

Sun, beach and BEER! This is a fresh blend between a New England IPA and wheat beer. This hazy...

In the days of long sea voyages, IPA was extra heavily brewed and extra hopped so that it could...

That bear is Super Dupa! The name refers to the expression super duper, or excellent! Moreover,...

Jopen have added ginger to their low-alcohol Jopen NON IPA. In addition to the spiciness of the...