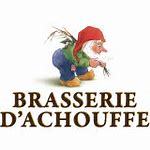 Set at the heart of the verdant Belgian Ardennes, our brewery specialises in brewing quality special beers. The story begins in the late 1970s when two brothers-in-law, Pierre Gobron and Chris Bauweraerts, decided to create their own beer, in their own brewery. At first seen as a hobby, the Achouffe Brewery developed to such an extent that one after the other, Pierre and Chris decided to embrace the adventure full time.  The Achouffe dwarves soon wanted to explore other lands, and their Dutch cousins were the first to offer them a warm welcome. Today, Achouffe beers are supplied to over 40 countries across the world. The brewery has been owned by the Duvel-Moortgat Brewery since 2006.