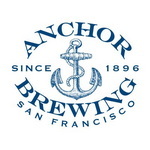 Anchor Brewing is, quite rightly, seen as the first American craft brewery with a history which dates back to the 1890s and the California Gold Rush, when German brewer Gottlieb Brekle arrived in San Francisco with his family.

Today it is a modern enterprise yet still embraces traditions including solely whole hop and all-malt recipes, open fermentation, dry hopping, kräusening and bunging.  The Anchor Brewing Company cherishes its traditions. It’s one of the last breweries to produce “California common beer”, also known as “steam beer”, a name that they have trademarked.